This article was originally published in, and has been reprinted with permission from, Retirement Daily.

What is a Fixed Index Annuity?

A fixed index annuity, or FIA, is a fixed annuity that offers a minimum guaranteed interest rate and potential for higher earnings than traditional fixed annuities based on the performance of one or more stock market indexes. FIAs can include lifetime income either with a minimum guaranteed withdrawal benefit (“MGWB”) or an optional income rider. Issue ages for most FIAs are 0 to 80 or 85.

When you purchase a FIA, you’re given the opportunity to allocate your initial premium between a fixed account and one or more indexing strategies. You can typically change your allocation during a 30-day window prior to each contract anniversary. The fixed account pays a fixed rate of return that currently ranges between 1% and 2%, depending upon the FIA.

Indexing strategies earn interest based on the performance of a defined stock market index, with the Standard & Poor’s 500 Index being the most popular offering. The measuring period for most indexing strategies is one year, however, two-year strategies are also available.

Fixed index annuities are subject to a declining surrender charge schedule that’s standard in all deferred annuities and is generally five to ten years. FIAs are meant to be held for the long term. Surrender charges help insurance carriers invest in longer-term bonds with higher yields and to recover initial fixed costs for setting up the contract. They also help actuaries price their deferred annuity products efficiently.

The majority of FIAs allow free withdrawals of up to 10% of the contract value or the initial premium beginning in the first or second year. Surrender charges apply only to excess withdrawals.

Unlike a direct investment in an index where you participate in gains as well as losses, there are two basic differences when you allocate funds to an indexing strategy within a FIA:

I will illustrate how FIA interest crediting works with some examples. Let’s assume that you invest $100,000 in a FIA and one of the indexing strategies that you choose is the S&P 500 one-year point-to-point strategy with a cap of 4%. Here are three different scenarios that occur during the first three contract years: 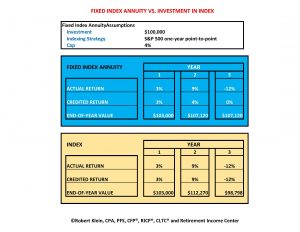 Year #3 – Return = -12%
Since the return is negative, no interest is credited and you maintained your FIA account value at $107,120. Had you invested directly in the S&P 500 index instead of using a FIA indexing strategy, you would have realized a loss of $13,472, reducing your investment value to $98,798.

Gains are Retained with a Fixed Index Annuity

Unlike other types of investments, FIAs are unaffected by stock market declines. Although gains from increases in indexing strategies are limited by cap rates, they’re locked in.

The ability to shelter gains from subsequent losses isn’t available with most other types of equity investments. This benefit can be especially important for retired individuals who don’t have a long-time horizon to recover from sizable stock market losses.

The best way to illustrate this is with a multi-year example comparing an investment in the S&P 500 Index with a fixed index annuity S&P 500 indexing strategy for the duration of retirement using the following five assumptions: 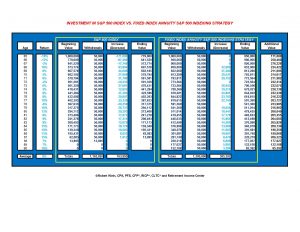 There’s “good news, bad news” for the S&P 500 Index investment. The good news is that it participates in 100% of the positive year returns. This includes nine years when returns are 10% or greater and 20 out of 21 years when the returns exceed the FIA S&P 500 indexing strategy annual cap of 4%.

Defensive investment and protection strategies are the key to the success of a retirement income plan. Just like a HECM mortgage strategy can be used to protect against sequence of returns risk, fixed index annuities can provide a buffer against stock market risk. Both strategies are timely given the current 12+-year bull market.

If you don’t want exposure to losses with a potential decrease in available investments to draw upon throughout retirement, are unsatisfied with taxable CD rates, and are seeking tax-deferred growth with an opportunity to participate in the upside potential of the stock market, then you may want to consider diversifying into one or more fixed index annuities.